category: Thrills, Chills, and Quills: Thoughts on Suspense Writing Comments Off on EYE OF THE NEEDLE: Ken Follett's Modern Classic

In 1978, Ken Follett hit the big time with Eye of the Needle, a WWII espionage tale that grabs you by the large intestine and slowly pulls it from your body cavity.

With the Allies amassing an invasion force in 1944 Britain, secrecy is paramount. Faber, a deep-cover German superspy (code name: "Die Nadel"--The Needle--for the wicked stiletto he favors) stumbles upon the biggest secret: the invasion force is a fake, a vast array of cardboard and wood planes and tanks, in precise formations, cleverly designed to draw German defense forces away from the Normandy coast and toward Calais. With British intelligence in hot pursuit, Faber desperately flees across Britain and finds himself stranded on a storm-wracked island and entangled with its inhabitants, a bitter wheelchair-bound man and his repressed, lonely wife, Lucy.

This was one of the novels that steered me toward the suspense genre and established Follett as heir apparent (along with Jack Higgins) to Alistair Maclean, who had fallen way, way off his early form by then (sidebar! I remember tossing aside Maclean's River of Death after a few chapters, wondering how in the hell the author who kept me glued to the pages of South by Java Head and The Black Shrike could have managed such a weak effort) .

Follett succeeded Eye of the Needle with another great story, The Man from St. Petersburg (no, it's not about a renegade shuffle-board playing retiree in Florida...it follows a Russian anarchist and assassin who falls in love with the suffragist daughter of an English aristocrat, just before the horrific bloodletting of 1914). This novel, I suspect, would have been huge, if not for its rather dull title.

Follett continued to have success but his later novels, for me, never reached the same heights as Eye of the Needle (although I freely admit to not having read them all).

Thoughts on excellent openings to works of fiction...

Writers of all types struggle and strive to open a piece with the best that they can.  First impressions, and all that.  It's important to hook the reader with a barbed point, in the fleshy part of the mouth if at all possible.  Good openings establish ground rules, tone, pace, and setting.  Great ones become memorable and set the bar very high indeed.  Here are some that are great... 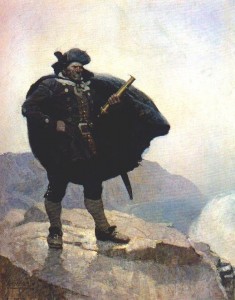 I remember him as if it were yesterday, as he came plodding to the inn door, his sea-chest following behind him in a hand-barrow; a tall, strong, heavy, nut-brown man; his tarry pigtail falling over the shoulders of his soiled blue coat; his hands ragged and scarred, with black, broken nails; and the sabre cut across one cheek, a dirty, livid white. I remember him looking round the cove and whistling to himself as he did so, and then breaking out in that old sea-song that he sang so often afterwards:--

With that opening, Stevenson accomplishes two whopping good things.  First, he establishes the pace, atmosphere, and foreboding that permeates the novel. And he does so by describing, in exact, spare language, the old captain, a sea-dog who will be dead by the end of the third chapter.

The second thing, which he couldn’t have realized at the moment of writing, was the creation of the popular, romantic image of the pirate that defines what we believe to this day. Captain Jack Sparrow? A pretty Disney twist on Stevenson’s drunken, murderous captain.

How does Stevenson manage this? Lesser writers might go on and on about a character’s minutest traits…their fleshy ears, their baggy pants, their inch-long nose-hairs. Who cares? If they don’t define the character, what difference do fleshy ears make (unless you’re writing a character with exceptional hearing)?  The first sentence runs for sixty-four words, yet stabs and jabs like a series of knife-cuts. Stevenson gives us a snapshot of “black, broken nails” that says it all.

This is craftsmanship at its finest.

If you must split hairs, that paragraph is technically not the opening of the novel. It’s actually the second paragraph, but it electrifies the story and gets it going. Good luck suing Mr. Stevenson over it. 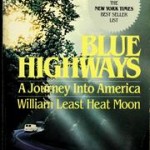 Beware thoughts that come in the night. They aren’t turned properly; they come in askew, free of sense and restriction, deriving from the most remote of sources. Take the idea of February 17, a day of canceled expectations, the day I learned my job teaching English was finished because of declining enrollment at the college, the day I called my wife from whom I’d been separated for nine months to give her the news, the day she let slip about her “friend”—Rick or Dick or Chick. Something like that.

Yeah, I know, Blue Highways is not fiction.  It's Least Heat Moon's marvelous travelogue of his looping trip around America, taking only the backroads (the highways drawn in blue on old roadmaps).  But this opening would be terrific for a novel.  The author exploits something we've all experienced, those late-night good ideas that sneak in as we try to get to sleep when our minds are taking tired, crazy turns, ideas that maybe aren't so good by light of day.  The paragraph outlines the turmoil that has just smacked him in the face.  As it turns out, that bad idea turned into a bestselling book.

In four sentences, he summarizes his life to that point, and you understand completely his compulsion to escape it and hit the open road.

No one would have believed in the last years of the nineteenth century that this world was being watched keenly and closely by intelligences greater than man’s and yet as mortal as his own; that as men busied themselves about their various concerns they were scrutinized and studied, perhaps almost as narrowly as a man with a microscope might scrutinize the transient creatures that swarm and multiply in a drop of water. With infinite complacency men went to and fro over this globe about their little affairs, serene in their assurance of their empire over matter. It is possible that the infusoria under the microscope do the same. No one gave a thought to the older worlds of space as sources of human danger, or thought of them only to dismiss the idea of life upon them as impossible or improbable. It is curious to recall some of the mental habits of those departed days. At most, terrestrial men fancied there might be other men upon Mars, perhaps inferior to themselves and ready to welcome a missionary enterprise. Yet across the gulf of space, minds that are to ours as ours are to those of the beasts that perish, intellects vast and cool and unsympathetic, regarded this earth with envious eyes, and slowly and surely drew their plans against us. And early in the twentieth century came the great disillusionment.

H.G. Wells penned one of the all-time great openings with this. He describes the human race as full of hubris, diddling about our “little affairs” with “infinite complacency,” confident and assured. Downright arrogant. Then comes the ominous hook: don’t look now, but there are things out there that don’t give a rat’s ass how important we believe ourselves to be. I’ve yet to come across a more succinct, yet more unsettling, description of alien life than “intellects vast and cool and unsympathetic.” If I ever write six words together equal to those six, I’m retiring immediately.

After the slow buildup comes the topper: “And early in the twentieth century came the great disillusionment.” From that moment, the reader has a sense of dread and knowing.

Wells, of course, entertained greatly, but also imbued his early novels with layered meanings. He wrote The War of the Worlds in part out of anger at the British genocide of Tasmania, in which a vastly superior technological society wiped out an indigenous people. Wells was saying to his countrymen, “Hey, assholes, imagine if you were on the receiving end.”

We were about to give up and call it a night when somebody dropped the girl off the bridge. 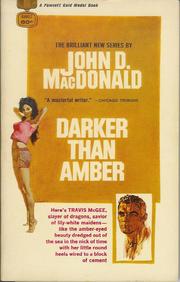 Zounds!  Florida mystery writer MacDonald knew his medium, his market, and his manuscript length.  Darker Than Amber, the seventh novel of his Travis McGee series, ran only 184 pages in paperback.  MacDonald knew he couldn't fiddle around, and had to get to the meat of things right away.  This opening is a prime example.  The next few sentences clarify a bit...McGee and his hairy economist friend, Meyer, are night fishing under a bridge in the Florida Keys, when a young woman, her feet wired to a chunk of concrete, is thrown from a passing car above into the channel.  Neither you nor McGee have time to think.  You just dive right in.