FOR WRITERS: When Setting Becomes Character

category: Uncategorized Comments Off on FOR WRITERS: When Setting Becomes Character 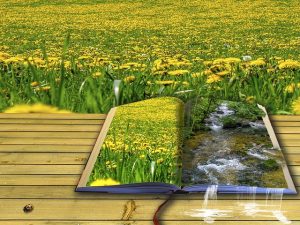 When I was in college, studying landscape architecture when it didn’t interfere with my busy beer-drinking schedule, the dean liked to hammer home a recurring concept. “Genius loci,” he would say, his eyes agleam, his bowtie aflutter. “Spirit of the place.” You must understand a site fully before you design for it, he argued. Ideally, one should sit upon the ground in the middle of the place and meditate. Throughout a full year. Feel the sunshine. See the dappled light and shade on the grass. Observe the angle of the falling rain. Melt in the heat. Become one with the place.

Obviously, that ain’t happening, and he admitted as much. But his point was sound and it stuck.

It’s a lesson to apply to writing.

Setting matters. I read stories in which setting is irrelevant. I read mysteries set in Cornwall that may as well be set in Akron because place makes no difference. That’s fine; a story can be a good one even without a strong setting. But when the reader feels the setting, the place, the time, depth and dimension are added. Genius loci! The spirit of the place! One feels the grit and grime of Raymond Chandler’s Los Angeles, the heat and anger of John D. MacDonald’s Florida, and the small-town intimacy of Stephen King’s Maine.

There’s yet another higher level at which to take setting. This is when setting not only provides a descriptive backdrop, it becomes a character itself, inseparable from the story.

In Frank Herbert’s Dune (1965), the desert planet of Arakis shapes the characters, plot, history, religion, and social relationships. Take the setting away and you lose pretty much everything about this complex novel. Herbert realized this and let his master class in world-building dictate the story as much as any of the characters, and the novel resonated with a generation becoming environmentally aware and concerned with living with diminishing resources.

Last night I dreamt I went to Manderley again.

So begins Daphne du Maurier’s Rebecca (1938). It’s a carefully crafted first line, seductive, but not a tease. Manderley, you think. What’s Manderley? Why does it haunt the narrator’s dreams? I’m glad you asked. It’s the vast, English manor house and lands in which the story unfolds, and which bends the characters and their motivations. It’s a living, breathing place, not just a whopping big mansion as one expects in an Agatha Christie novel. It’s beautiful, elegant, sinister, and oppressive, practically oozing the questionable spirit of the first Mrs. de Winter, the beautiful Rebecca.

Not to bash Christie. She set perhaps her best novel, And Then There Were None (1939), in a whopping big mansion on a desolate English isle. This time it’s not just Colonel Mustard-in-the-Conservatory-with-the-Knife stuff. The place forces the characters’ actions and is inseparable from the nefarious goings-on. Did Christie take a page from Du Maurier’s playbook? I don’t know. I do feel that both setting and character in this novel surpass her earlier work.

In The Grapes of Wrath (1939), John Steinbeck uses setting not only as character but also as symbol. He paints a grim picture of dust-bowl Oklahoma:

Then it was June and the sun shone more fiercely. The brown lines on the corn leaves widened and moved in on the central ribs. The weeds frayed and edged back toward their roots. The air was thin and the sky more pale; and every day the earth paled…Every moving thing lifted the dust into the air: a walking man lifted a thin layer as high as his waste, and a wagon lifted the dust as high as the fence tops, and an automobile boiled a cloud behind it. The dust was long in settling back again…

From there, we follow the Joad family west along Route 66 and into California, the promised land of milk and honey that turns out to be anything but. At each step, the settings—the lonely road, the deserts, the crowded migrant camps, the lush farmlands—create powerful symbols for the struggles of the Joads.

It’s easy to go overboard in describing a setting, and thereby boring the reader. A good approach would be to describe to your hearts content in a first draft, then savage it with a meat cleaver in the edits. But with a poet’s meat cleaver; craft the details so that they say as much as possible in as few words as possible.

So. Consider setting in your next effort. Find the spirit of the place and see where it takes you.